My taxi sailed through many red lights without any pretension at
braking or stopping. The Calcutta police were not that interested and
anyway there was no traffic. It was post Durga Puja rush, the streets
were incredibly quiet after the insane and wild ecstatic dancing by
thousands of really happy people. The Durga takur was being taken in
large lorry trucks packed with revelers of all ages, faces all smeared
with vermilion powder beaming with huge smiles. 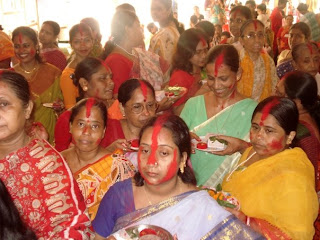 My cab driver honked for no reason from time to time bot often as we
sailed through those red lights, I suppose just in case there was
someone coming through the green lights the other way. I felt safe as
I am pretty sure that the cab driver valued his life, probably more
than he valued mine. People were settling down for the night in their
apartments, on the sidewalk, on rooftops, on chapawas (cots) in
alleyways. Once we hit downtown from Behala I could see that some
people were still going to Zeeshan's for a midnight meal. It's
exhausting to dance ecstatically and wildly for hours on end to the
relentless sounds of the drums (name? help me out Bengali readers).
I got home exhausted and safely. 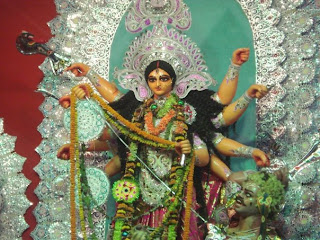 I had joined the dancing too, invited by my cousins and their kids.
The crowd didn't expect me to do much being a grey haired lady and
all, but I gave it my best Bollywood cum bellydancing moves, with a
some Sufi hair flinging thrown in for good measure, and they went berserk with
pleasure and appreciation. Lots of people video'd my dancing, but of course,
I couldn't so you won't see me when I post my photos and videos. I
can't post them today for technical reasons.
Please check again soon. I will upload to this page all the incredibly
beautiful and wild photos and videos I took.
It's monsoon pouring outside. I am going to go and watch it and get
out of this sticky little internet cafe, yar!
(voc: "Yar" = "Dude") 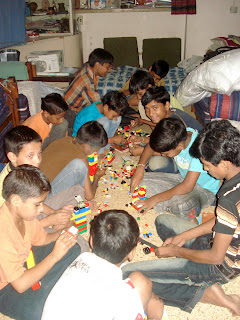 It's been a great beginning to my trip to India this time. Last time was different. I landed in Kolkata from Dubai, and I had a reality collapse as these two cities are as different as identical tiwns are the same. This time I transitioned from my home on Vancouver Island to Manzil House in New Delhi (www.manzil.in) and they are similar in many ways. This house is a  private one, yet so many youth are here all day long and the kitchen is constantly busy with the cook providing an endless stream of parathas, masala tea and cold water, while the young ones bustle about making music, going online, hanging out and coming and going.

The photo on the left is of the kids who were supposed to be learning Englsh having a great time with the freecycle Lego and Duplo I brought. It was a first time with these toys for most of them, and it's so intuitive, no explanation needed and beautiful creations emerge immediately.

I'm right at home... except that geting two long shirts ironed downstairs at the market only cost 25 cents. At this price, I would be outsourcing most of MY housework. YES.

It's hot here, but manageable. Sunny and Meeta had me over for lunch yesterday in their cool apartment (literally cool as it is on the ground floor, shading them from much sun) and I learned a whole bunch of stuff about Indian culture that I did not know and needed to know. What is lying? When is it okay in which culture? If someone's feelings are saved from being hurt by lying, does it make it okay? The religious stories of Hinduism, says Sunny, are full of examples of lying to save the day, save the person or the tribe. My question is when does lying honourably become a slippery slope into lying for less than honourable reasons? When does it catch up to you? If you lie to your parents, and it's okay, then I suppose it's understood that one's children would lie to us. And if they do, is that okay?

The night before I had stayed up late with some younger ones, discussing whether one should and can practically follow one's heart's desires. In India. there is the question of duty to your parents to a much deeper and wider extent than it arises in Canada. It exists to the point that aside from looking after them in their old age, that we have a duty to keeping them happy long before they are old by following their wishes and plans, much to do with the physical and financial security of the parents, rather than one's own heart's desires.

These are complex questions, that have certainly been factors in my family's life in India, and the subsequent emigration to the West.

There are some journeys we must make alone.

It is not possible to take everyone with you all the time. Or any variation on that theme.

The heart is a lonely hunter. Laurens van der Post said that. But it's true. The moment of death, the moment of birth, well, it's alone. There may be a midwife or a host mother, but the struggle is so immediate, so daunting, that we are in fact alone. No cajoling, no support, no rah-rahs, are of any use. There is only the task at hand. It hurts. It is scary, and for once, it's not even funny.

A friend of mine said her daughter was India-mad and would I be blogging? Yes, I would.

I am mad about India. I am at mad at India. India is mad at me. It is madness to go to India. It is mad not to go. Madness is an aspect of love in that love is not a rational phenomena. Salman Rushdie said on CBC the other day that he loves India, and he goes back over and over again because it's an endless source of story and that he comes back with bulging notebooks. I go back to hunt for some method in the madness that is half my life. I don't expect to find it, but I make plans anyway just in case I find some jewel, some method with some symmetry. My father. It is because of him that I am half Indian. Bengali in fact. It is because of him that I go back to India look for signs, clues, look for justice, poetic or otherwise, and I look for symmetry in our joint story.

And much less sublimely, going to India is fun. Lots of fun. It rudely tosses out my pastel existence and covers me in a strong shade of vermillion diesel studded with aluminum paan condiment wrappers.