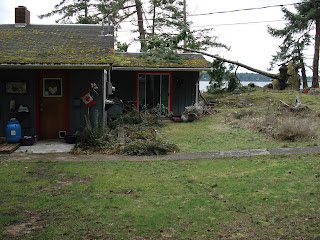 We came home January 30th. I wanted to write something but there was too much to write. At first, all I could do was stay home and be quiet. I walked around the house like someone who had found a quiet cloister after years of a 24/7 social setting. I so enjoyed the quiet. I admired the mountains, Northwest Bay, the trees, the green, the rain, the softness of the air and all the good things in our home. I did not want to go anywhere. The cats did not look too perturbed about our absence. A tree had fallen over during the storm and had landed on our house. Strangely, it had not gone through the roof, but just sort of sat there. At first it was alarming, but we said "we'll deal with it tomorrow" and then that tomorrow was finally 3 weeks later. It seemed quite normal to live in a house with a fallen tree on the roof.

Every day was full of things to do, but nothing seemed to be needed done in a hurry. We went about our business as if we had never left, but with a reflectiveness.... each of us with our memories and thoughts, sometimes talking about Dubai and Delhi and "that time in Varanasi". I thought a lot about my friends in India. The kids started going to school at Ballenas High School, part time, and were really happy to be with their friends again. So many of the friends complained that things had been really boring for them while we were in India. Since we came, the house had one or two or several friends over every day. The kids had a big party sometime in February and it went really well. 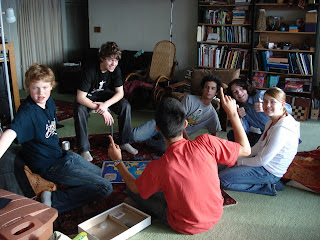 Nothing has really changed for me. I am quieter. I will go back to India, there is so much unfinished business for me there but now that I have "shown" the kids, I can go alone next time. As Sunny said, "India is an abstract concept". It's not really a country, but a collection of feudal tribes with thousands of cultures and ideas, and histories, and concepts about how to live and die. Borders aren't clear, either geographically or emotionally. The India I longed for, even knowing before I left that it was naive of me to do so, never really existed except in my heart, one already jaded. But I found that India in my best friend: Mehdi. He is my India.

Then there's the country India. It's my mother and my father and my worst enemy. It's the proverbial impossible therapist. The one who treats you badly and expects you to submit and then get enlightened. :-) You know, boot camp. Survival of those who are best at transcending, denying and/or opportunism.

I am touched by the everyday lives of people. Here and over there. The moments of grace, of euphoria, of affectionate recognition by someone you know, even if I have been in conflict with them. I feel bonded with them; we are friends. They are part of my life, my landscape. I love them.

My children are great. I mean, great. How did such symphonies happen?